How to learning the English alphabet with children? | Novakid
Skip to content

English letters will be confused, and children will not be able to remember them. They will yawn, be distracted and look anywhere but at the alphabet, and have a complete mess in their head. Learning the alphabet in this way is absolutely ineffective!

Diligent children can cram it. But how long will English letters and sounds stay in their memory? It is well known that nothing is remembered for a long time without associations and an emotional response. And so much for when it comes to teaching children.

The main thing is associations and emotions!

Which associations and emotions can one have when remembering letters? Just 26 letters- sit and learn; this is what most students do when they face the problem of learning the English alphabet. They look at the letters and try to remember them. But the process is too difficult.

So, printing out the letters is not enough. Then we try to combine auditory memory and visual memory. Download and listen to songs, watch cartoons and videos about English letters and sounds. Oh! The boring letters began to come to life, and as if with a wave of a magic wand, turn into vivid visual images. And, wow, they are sounding! Watch it once; watch it twice. Now the song about the English alphabet is remembered much better than the well-known “ABCDEFG”. Now, when a child looks at the English alphabet, he or she can recall the names of the letters.

Now it is time to write English letters…

Are you asking a student to write them? Something will surely pop up in his or her memory- a mix of capital and small letters, but what if you say English sounds instead of letters? Oh, a complete mess. It turns out that looking and listening alone is not enough. What to do? Act! Act quickly. A purpose-oriented and controlled activity makes it possible to activate all types of memory, including emotional, build strong associations and learn and remember letters and sounds for a long time.

In article about English sounds and letters for children, we told you how to approach English letters and sounds, and now – how to easily and playfully learn English letters and sounds for both school children and kids of 5-6 years old. The kids will be happy to get involved in the process and quickly remember both lowercase and uppercase letters, as well as sound-letter combinations.

Here is a list of the simplest games that can be easily played with a child of any age at home. Almost all games are easy to make yourself.

Everyone played lotto as a child and has a good idea of what kind of game it is. Bingo is an English name, but the essence of the game is the same in all countries. You need several game cards with English letters on them, a bag and plastic, printed or even written English letters.

The rules are simple. Take turns to take a card from a bag with a letter or the letter itself. Name either a letter or a sound that the letter stands for and give it to the first person to find a match on their game card.

A more complex version: write lowercase letters in the spaces, and put uppercase letters in the bag. Or you can use pictures with words instead of cards with letters. The “it’’ names a word, and the players try to find the letter that corresponds to the first sound of the word. Or vice versa.

Dominoes is another famous game. Divide cards in half. One half has a letter, and the other one has a picture. Note! The letter on each card does not match the picture shown on the same card. The corresponding picture is on the next card! The task is to mix the cards, distribute them between the players and collect the “alphabet train”. You can also arrange cards by letters or sounds or use pictures and words.

Puzzles from the English alphabet are similar to dominoes. The only difference is that there will be no train. Puzzles can be of two types. One half can either have both lowercase and uppercase letters, and the other half has a word that begins with this letter, or it can have three parts: a lowercase letter, a picture, an uppercase letter. The second version is more complicated and, therefore, more interesting.

This game has another name – “Slides and Ladders”. The point of the game is to go to the finish as soon as possible! You will need a game card with English letters instead of numbers. To bring variety to the game, you can add arrows indicating back and forth movement on the board. Black squares mean you need to skip a move; red ones mean you must skip two moves. Place the players’ counters on the start. Throw the dice and move forward according to die rolls. But do not forget the primary purpose of the game is to name the letter which the player puts their counter on! If you do not name it, you skip a move! The rules can be complicated by naming not only the letter but also the sound or word that begins with this letter.

You can make a game board together with your child; this is a very exciting activity. 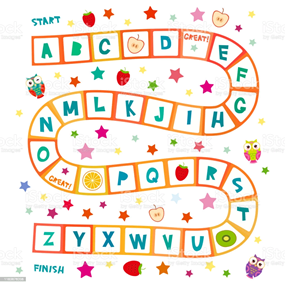 Memory is another simple but exciting game, which is great for memorising the English alphabet with children. You will need 2 identical sets of cards with letters that are mixed and spread out face down. The task is very simple – you need to find a pair of identical letters! The players take turns turning over the cards, remembering the letters. If a student manages to find a match, they keep it- if not, the move goes to the other player. The main thing is to remember where each letter is and its English name or the corresponding sound!

You can either mix 2 identical sets of letters, a set of lowercase and uppercase letters or a set of pictures and letters, look for matching pairs and name them.

Written letters are sometimes not enough. Children are very fond of touching everything, and kinesthetic memory is the leading type of memory for many children. Therefore, we will need plastic English letters for the following types of games.

Everyone’s favourite game is “What’s missing?”. It is good for drilling or revising the alphabet. The game is very simple – some letter disappears, and the one who guesses what letter it is becomes the “it” and hides the next letter.

The game is also remarkable as before the letter disappears, the players close their eyes and then open them. But the main thing is to learn the English alphabet, so the “it” must command “one, two, three close/open your eyes” in English!

The game will also help children learn the order of English letters. To quickly determine which letter has disappeared, the letters should be arranged in alphabetical order.

A more complex version is when 2 or even 3 letters disappear at the same time.

If the letters on the magnets are small wooden fishing rods (for example, from the children’s game “Fishing”), then memorising English letters turns into an exciting fishing trip! You can fish at speed or on command – one says a letter or sound, and the other player catches it. You can even catch the fish with a letter that you need to name on the back of it. If you name it correctly, then the fish is yours; if you do not – release the fish back into the “lake”.

The letters are easier to remember by touch! Each English letter has its own shape, but only true experts of the English alphabet can recognise it by feel! To do this, you need to put all the letters in a bag or box with a hole for a child to put their hand in. You need to either pull out the desired letter or any other letter, but first identify it by touch! If you pull it out and name it correctly, you receive a point! If you make a mistake, then your move passes to another player. The game is dynamic and fun and will not leave indifferent any child!

Not everyone can sit quietly and play even the most exciting board game for a long time. Children are children, and movement is their natural state. In order to warm up, we offer the following English alphabet games.

for English letters, then the game becomes even more exciting! The rules are as follows. The “it” hides the English letters and the players search for them. Each found letter is named loudly! In the end, count how many letters have been found by each student; remember to count only those letters that were named by the player. A student with more points becomes the “it”.

The rules of “Hide-and-seek” can be slightly varied if there is a hungry dragon instead of the “it”! You may use any other “hungry” puppet toy (shark, dinosaur, etc.), which asks to find a specific letter, and if players fail, it will threaten to eat or bite everyone: “I’m hungry, please, give me… ABCDEFG… or I’ll bite you!”

A “glutton” toy is easy to make out of an ordinary sock! The children will definitely make friends with it and try their best to satisfy its requests – to feed it to the full and anything that its Majesty pleases.

And finally, another fun activity with letters is “Forest Paths” or jumping on pebbles. As you must guess, English letters are used as paths or pebbles. They are drawn either on A4 paper or various pebbles and spread out on the floor throughout the room. The task is to go from one end of the rooms to the other, naming the letters that you step on. Or jump on those being named by the “it”. To complicate the rules, add a time limit. You need to jump in 10 seconds. The winner is the one who named more letters. So, ready, steady- go!

Learning and memorising the English alphabet turns into an exciting activity if you add a little creativity and turn the boring process into a game. We use all available materials. The more creative, the better! Write English letters on beans, bottle lids or Kinder Surprise boxes, and let a child pull them out of the bag, name them and put them in the egg holder. The more unusual the presentation of English letters is, the faster children will remember them!

And if you still doubt your creative abilities, entrust your children to experienced teachers of Novakid Online English School, who will definitely get on well with your child and choose the best activities for memorising and practising English letters and sounds. Video lessons will not leave anyone indifferent, neither schoolchildren nor preschoolers. Sign up for a free lesson and see it for yourself!

%d bloggers like this:
We use cookies to ensure that we give you the best experience on our website. If you continue to use this site we will assume that you are happy with it.OK